This is the blog where we dissect the opening sentences of popular works of fiction. Few people outside of the writing community know how much blood, sweat, and tears go into crafting the perfect Opening Line; and for that reason, I want to bring attention to the incredible work that a writer puts into these first few words. Today we will examine my very own novel, The Bastard Boys of Montezuma.

First let’s take a look at the blurb:

Cash Holliday and Marshall Earp are the illegitimate sons of the most notorious gunslingers in the West. Despite a lingering bad economy in 1896, the two operate a flourishing detective agency, largely thanks to selective partnerships.

When Sheriff Kristof Varga hands Marshall a bounty for the infamous Cactus Kid, they realize their business could change overnight. But Cash receives a letter stating some of his late father’s possessions are in Tombstone and he becomes interested in a different pursuit. Faced with lying to his best friend, crazy superstitions, a girl with a mysterious past, and a Pinkerton agent who is hot on their trail, Cash must decide if he’s willing to risk their lives for the secrets of a father he never knew.

This was such a fun book to write. Challenging, but fun. It took a lot of research to accurately write about the 1800s, but boy was it interesting.

“Across the street, I counted six crows perched on the rooftop of the funeral home, which was as ironic as it was prophetic.”

What do you think? Do you like it? Here’s what I hoped to accomplish with this line.

“Across the street, I counted six crows perched on the rooftop of the funeral home…”

I give an eerie location and an even eerier sight to catch the reader’s attention.

“which was as ironic as it was prophetic.”

Then I hit you with this statement, which I hope makes you ask the following questions:

Why is it ironic to see six crows sitting on the rooftop of a funeral home?

What is the significance of crows? Six in particular.

And finally, why is this sight prophetic? Does it have to do with the site, the funeral home, and alluding to death?

If you want to find out, click the Barnes & Noble link.

This is the blog where we dissect the opening sentences of popular works of fiction. Few people outside of the writing community know how much blood, sweat, and tears go into crafting the perfect Opening Line; and for that reason, I want to bring attention to the incredible work that a writer puts into these first few words. Today we will examine Edgar Cantero’s Meddling Kids. 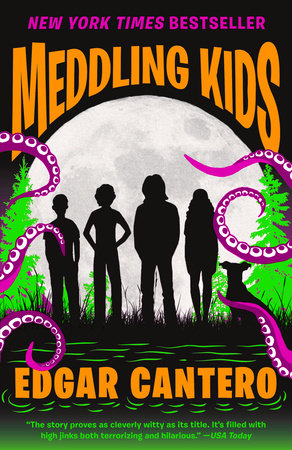 First, let’s take a look at the blurb:

SUMMER 1977. The Blyton Summer Detective Club (of Blyton Hills, a small mining town in Oregon’s Zoinx River Valley) solved their final mystery and unmasked the elusive Sleepy Lake monster—another low-life fortune hunter trying to get his dirty hands on the legendary riches hidden in Deboën Mansion. And he would have gotten away with it too, if it weren’t for those meddling kids.

1990. The former detectives have grown up and apart, each haunted by disturbing memories of their final night in the old haunted house. There are too many strange, half-remembered encounters and events that cannot be dismissed or explained away by a guy in a mask. And Andy, the once intrepid tomboy now wanted in two states, is tired of running from her demons. She needs answers. To find them she will need Kerri, the one-time kid genius and budding biologist, now drinking her ghosts away in New York with Tim, an excitable Weimaraner descended from the original canine member of the club. They will also have to get Nate, the horror nerd currently residing in an asylum in Arkham, Massachusetts. Luckily Nate has not lost contact with Peter, the handsome jock turned movie star who was once their team leader . . . which is remarkable, considering Peter has been dead for years.

The time has come to get the team back together, face their fears, and find out what actually happened all those years ago at Sleepy Lake. It’s their only chance to end the nightmares and, perhaps, save the world.

First, let me say this, I love the idea of this book: Scooby Doo meets Lovecraft. Basically, if Fred committed suicide, Velma went on to become an alcoholic as opposed to an astrophysicist, Daffney was a tomboy kicked out of the army for aggression issues, and Shaggy was institutionalized for psychiatric problems and hallucinations, these would be the grownup characters of Meddling Kids. And yes, Dead Fred is a character thanks to Hallucinating Shaggy.

“It starts when you pull the lamp chain and light doesn’t come.”

We’ll dissect this short sentence to get the most out of it.

What starts? Maybe it’s the ceiling fan, but from the rest of the sentence and knowing what we know from the blurb, it seems like something much darker.

“…when you pull the chain and light doesn’t come.”

Ooh! Now we have something to add. While a ceiling fan is capable of turning on by one chain and adding light from another, somehow I believe this is referencing something sinister that maybe happens only in the middle of a nightmare.

But what is it? What’s happening?

If you want to know, click the Barnes & Noble link.